October 02, 2017
I never liked Cross country when I was a kid. We had to run a course that followed a stream around the part of town the school was located in, sandwiched between a couple of estates that I wouldn't have walked around, let alone run.

For some reason, we did most of this alone. I'm sure there were teachers on the route, but I don't remember many. And I think I would have remembered Mr. Bannister bellowing from the sidelines.

I'm sure this wouldn't be allowed nowadays and I hated it. Not to the extent that I would skive off, but I remember something particularly unpleasant about trudging through flooded and muddy paths in the winter. I used to play a lot of football and cricket, so I wasn't averse to exercise generally, but if there wasn't a ball to kick or catch, the interest wasn't there.

Roll on 25 years.
I'm standing at South Stack, Anglesey, with my sister-in-law. It's chilly in the late september air and there's a breeze coming from the south, off-shore. It's 10am, Elin's tower is just off to the right and beyond, across the void, Snowdonia.
We're with around 200 other people, all in wetsuits, most carrying tow-buoys, floats and other ancillary equipment and there's a sense of excitement in the air, a readiness for the race that's going to hurt.

This is the first ever Anglesey Holy Island Swim-Run and already the goalposts have moved. It was supposed to be 15.5km of running, and 2.7km of swimming, split into 6 separate sections. On this particular morning, due to the weather system moving in from the South, the route has been changed - the first swim has been cancelled as being, frankly dangerous, and the second swim has been shortened.
Great.
Back in Rhoscolyn Village hall: the race briefing continues.....Hang on.
What's he saying?
Swims 3 and 4 now become 2 and 3. Fine.
...did he just say repeat 2 and 3? run back to the start and do them all over again?
..oooohhh great.
so now, we have a 10k run, then 6 sections of swimming, of which 2 are repeats.
I don't lilke change, so this perturbed me somewhat, although I was happy to embrace it bearing in mind as long as you have an orange hat to follow, you can't really go far wrong.

So here we are, at the start, everyone ready to go.
The solos start first, presumably they'll be quicker, then 5 minutes later, we get our go.
One thing I notice is that no-one looks like a punter. I get the impression no-one has thought 'you know, I can run around the block a few times and bash out a couple of widths, I fancy giving this swim-run a go'!
So surrounded by athletes, me and Ju start running.
The first couple of kilometres are fine, downhill,and on tarmac, then off-road and onto the Coastal path.
As we cross the road, I realise, again, what a beautiful course this is, hugging the coastal cliffs. We undulate, firstly, through farmland, then moorland and thistles and back to grassy heathland.
The breeze is stiff, and trepidation sets in about the swims, especially when you can see the size of the waves.
The first 9k felt pretty tough. I was ready to swim after about 6, which was the original time we were meant to be swimming. Pushing through the last couple of kilometres did start to hurt. The trails are technical, often thin, sometimes overgrown, and always muddy.
When we got to the first swim, I have to admit I was whacked. 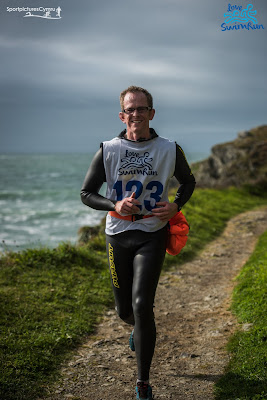 Goggles on, Towbuoy blown up, hat on.
At first site, if this wasn't a race, there's no way I would have contemplated going into the water.
The waves looked pretty big for my liking, and there was no way you could keep any sort of pace.
We dived in, and I immediately got cramp. Nice.
The next 20 minutes were spent alternatively getting smashed in the face with waves, swallowing sea-water and generally getting thrown around in circles whilst trying to keep afloat.
"you want to go with it, don't fight it!" says a voice in my head.
Yeah, more easily said than done...
Eventually I reached the buoy, and turned round it.
Fuck this. It wasn't going to defeat me!
I thought I'd get an easier ride on the way back, but the maelstrom seemed more intense, as now, the waves were coming over my head before pulling me back, giving the impression I really was going nowhere.
I eventually floundered through until I could feel my feet on the ground and got out of the water.
"Bit choppy that" I try to shout to a fellow competitor, but I can't really speak.
A bit wobbly, we carry on the run, and start to feel a bit more refreshed.
A short kilometre later we arrived at the second swim.
I needed a boost, and as we rounded the bay towartds the entrance we were overjoyed to see the three girls, wife, and in-laws waving flags and cheering us on - brilliant!
This really buoyed us up!
Getting in was fairly easy here, off the beach, a short wade in, although it quickly got interesting. The first half of this swim was also very choppy, visibility between waves meant that we could only see each other every 5 seconds or so even though we were less than 10m apart. eventually it calmed down as we rounded the channel into the next bay.
Cramp. More bastard cramp.
This was really slowing me down now.
600m has never felt so long.
By this time though, I'm starting to refine my technique. Much to my surprise it's actually a lot easier to get the head in the water and swim through the waves instead of being thrown about by them. So I adopt this method, making better albeit slow progress due to the cramp.
Getting out at this point was also tricky, onto a concrete step carried by waves and hoping not to get sucked back in. 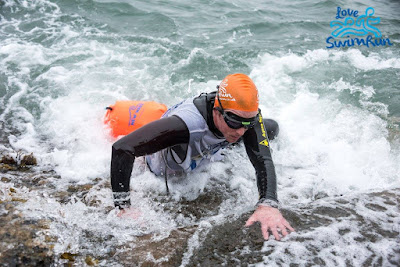 I'm starting to enjoy this.
2nd swim over, we have a short hop of 400m to the next one. Getting in was relatively challenging, off a rock shelf with the waves washing over it, but we negotiated it fairly well, timing it to minimise embarassment.
Staggering up through the heathland, we were directed to the 3rd swim which was at the end of a path flanked by brambles and thistles.
The transition was expertly manned by an enthusiastic marshall, which was a recurring theme.
This third swim was happily quite a bit calmer, navigating through a rocky channel and aiming straight for a sandy beach 300 yards further on. Nice and calm towards the end.
There are plenty of kayaks in the water and it's reassuring to see the powerboat in case of calamity. Not needed here. I may be swimming only with my arms due to the increasingly debilitating cramp, but I'm still swimming!
Right, what next?
Staggering out, we discuss our options at a usefully placed feeding station...
"So, are we doing the second loop?"
"looks like we might be last at this rate. Reckon the marshalls will still be there?"
"should be" says the marshall.
"ohh well I guess we have to then, right?!"
There's something instinctively wrong about running back where you've come from to fight your way through those already completed swims, but off we set.
Before long, and after a short detour the wrong way, we wend our way around the long bend of Trearrdur bay. I notice that it's actually raining quite hard, I'd not noticed before now..
We got back to the start of the 2nd swim, passing the three girls again on the way back to the car, still waving flags!! But looking wetter and wetter...
Once again buoyed, we're soon in the water again, off the small beach. Now smaller. This time it does seem slightly easier.
This could be soemthing to do with the gel and isotonic we had at the feeding station.
Cramp!
But a bit better....
The chop hasn't eased though, and this second loop is pretty challenging.
As we reach the exit shelf, Ju is well ahead of me. Clearly in better shape having completed a marathon the previous week.
Out again onto the concrete step, slightly more gracefully, and round the headland on to the last leg of the second loop.
This time we're warned to time our entry between waves as a few competitors have been thrown onto the rocks unexpectedly and as the tide seems to be coming in, it's getting slightly rougher.
This is good advice, but I end up half falling off the rock into, half jumping into the water and then tread water to see Ju execute a much better entry.
Another 300m around the rocky channel towards the beach.
Slightly amazed that we have got to this point and after a quick stop at the feeding station, we head off on the final running leg, a short 5.2 Km firstly following the coast on winding narrow trails, then reaching  wide grassy paths slightly inland before winding through a holiday park and down to the beach.
This is the easiest swim in terms of conditions, but for me, the hardest.
A recurring cramp is back again.
This is more than off-set by glancing back behind us to see a massive male seal popping it's head out of the water - one of the kayak marshalls mentions that he's been doing this all day.
Amazing!
I'm lost for words to describe the beauty of this part of the world, and what a privilege it is to be right here, right now.
We exit the water onto the beach, can't stop grinning. The end is near. 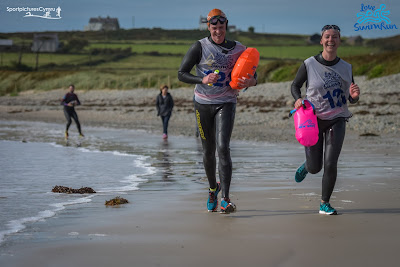 The final mile is over before we know it and we reach the finish line to a round of applause from other competitors.
What an event. Great organisation, perfect venue, I'm looking forward to making this a regular fixture in the calendar. Cannot wait until next time.
I just hope I'll be a little fitter... 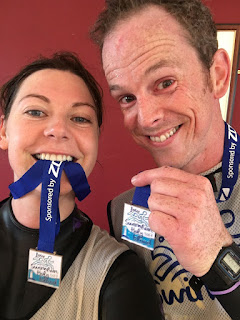