October 17, 2014
There is a movement in Lancashire. Local activism has been taking hold in the last few years. First there was the Jumbles development, 2010 - problems cleaned and climbed, vegetation removed, new routes done. Then, 2013 saw an acceleration in activity at Ousel's Nest quarry, with large blocks removed, trees cut back and new routes climbed. Of course, Tim has been in residence for upwards of 7 years, but only in 2013 did collective action start happening. This year has been the turn of Wilton 4.
Of course this is nothing new. From a cursory glance at the old Black Dog new routes book from the 1980s it is clear to see the flurry's of activity in various quarries that are in vogue at the time, the crags sometimes then falling back into obscurity 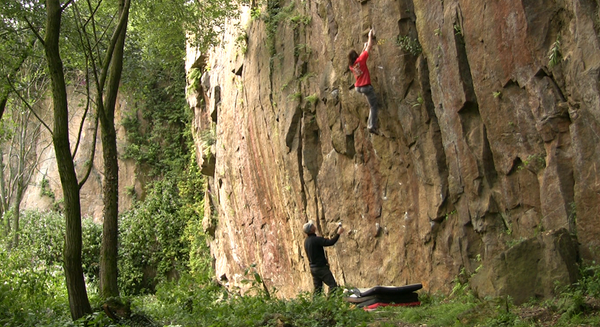 This activity has always been driven by local, dedicated climbers, usually with a slightly unhinged obsession for their chosen crag. The likes of Facebook and other social media have also played their part in getting other climbers passionate about the local area.
Without local heroes willing to put in the time cleaning, sacrifice climbing time to put something back, the climbing would still be languishing under thick moss and lichen. These people play a big part in uncovering the potential to others, pointing climbers at good routes, suggesting areas for new routes and those that need cleaning.

"Over the years this quarry has become needlessly neglected by the majority of climbers. This is a pity, because it contains some excellent climbing. It is the smallest of the four quarries on this site and lies at the top of , just before the sharp bend at the top."
Lancashire Rock, 1999

It's clear. Wilton 4 will not be to everyone's taste. Short sharp crack lines, cutting, vertical aretes and easy slab padding is the order of the day here, but it's small, a condensed version of the other Wiltons, The routes aren't as long as even Wilton 2 routes, and the area is a bit scruffy, a bit forgotten. These all go to explain the feedback loop of neglect that's happened over the last twenty years.
Even in the 1986 guide the crag was described as being neglected,

If you took Wilton 4 out of it's context and air dropped it into the flatlands, it would deservedly get much more attention than it currently enjoys.
Alas, with Wilton 1, 2 and 3 next door, it struggles to compete.
But if you want to challenge your crack climbing skills, there are several extremely testing finger cracks ready to chew flesh and bone alike.
Like slabs? EKU 28 (E3 5c) is likely to test the boldest of climbers, with no protection available.
Boulderer? Wilton 4 now has a good circuit of sequency problems, mostly above 6A

The time has therefore come for the unrealised potential of climbing in Wilton 4 to be exposed for all who care to see it.
In the intervening years from the late 80s to the 2000s, it would appear not many people climbed in the quarry, and there are as far as I know no new routes. Then, in 2007 the Mueller brothers paid a visit and climbed the arete right of Neat Whisky, an obvious 6C boulder problem. Things went dormant again, until this year when I paid a visit to see just how bad it had got. 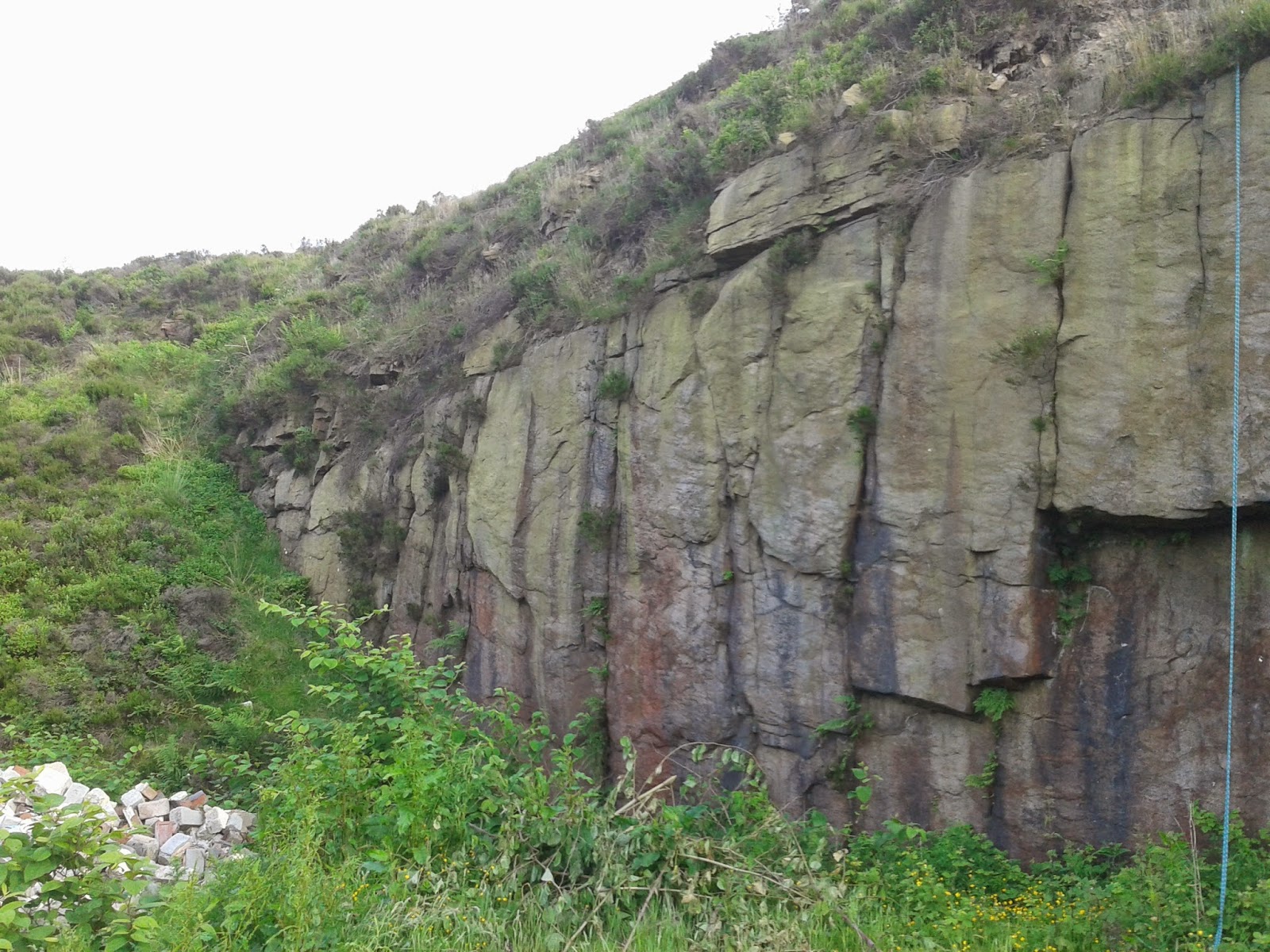 The inevitable ferns, moss and heather were sprouting from every available crack on Sanction walls, the obvious steep wall on the left of the crag. The top outs spilling over with mud and loose blocks. I can hardly believe these routes were even originally climbed in this state.

The first issue to tackle was to get some stakes in, so I procured 4 from Rob at the BMC and put them in the following day. This allowed me to ab off and start getting the routes cleaned.
Over the course of the next few weeks all the routes on Sanction Walls were cleaned.
I managed to get Robin invlolved and we collectively redistributed a lot of the rubble pile to flatten out most of the uneven landings on Sanction walls. We also spent a couple of wet lunchtimes cleaning off the top of red wall round the corner from Neat Whisky, which has given up a few boulder problems, most notably a fiercely technical problem, Nemesis 7C.  More info here.
Then there was some enthusiastic mud moving to flatten some landings in the hollow, and Tim came down to do some cleaning. Dave then got psyched to try the hard routes and a fantastic day was had in the dry September spell in which Hell's Bells had 2 repeats - not bad for a route that hasn't been touched for at least 20 years. Rick Ginns on Johnny Walker Font 5 / VS 5a

Progress so far this year has been good, if a little sporadic. All the routes on Sanction walls are now clean, climbable and can be belayed off stakes. A vast improvement on the beginning of the year. Routes are starting to be climbed, some for the first time in 25 years: 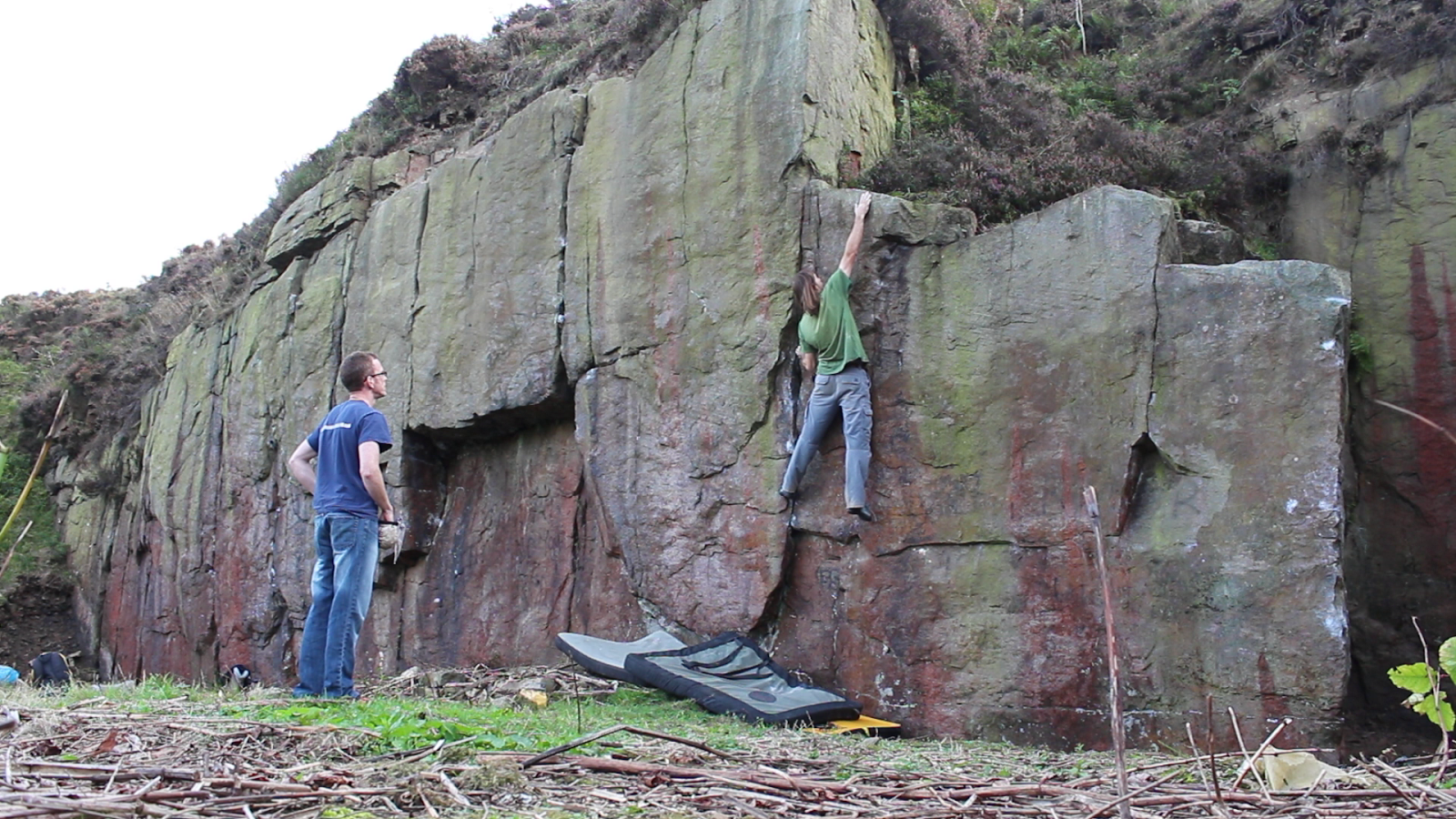 Hell's Bells E5 6B / Highball 7A from Rick Ginns on Vimeo. I guess the purpose of this post is to encourage people to see through the moss and scruffiness of venues like Wilton 4. A bit of digging through the esoterica reveals some fantastic routes, and good adventure. Oh, and next time it's dry, pay Wilton 4 a visit, it's a quality venue. I've not even mentioned the excellent slab E3s to the right of the crag, or the Diffs on the far right. There really is something for everyone. 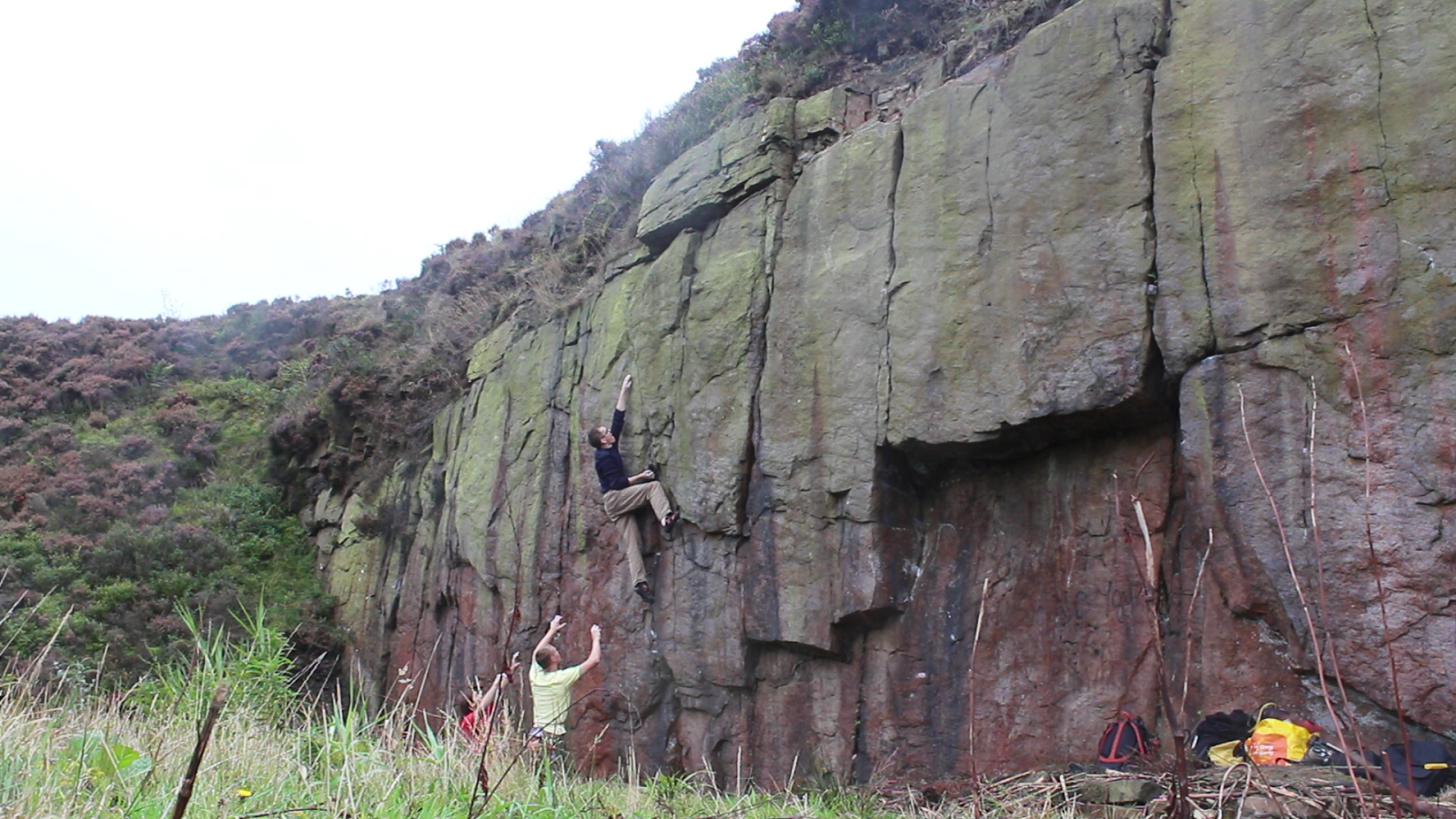