January 16, 2014
So I've not updated the blog for a while, and now I've worked out how to reorder the posts so they appear on the actual date they happened rather than writing them donkeys after etc...
Anyhow, what's been going on since the walk with my Dad?
In short, my climbing has been fairly sporadic.
Indoor climbing
In October and November I dusted off my harness and had a few weeks of going to the wall and getting back into leading. Now bearing in mind I've not been leading for upwards of 2 years I expected to find it tough. I decided to take a different attitude than I have in the past and actually use the sessions as a training resource. Sounds silly but I've always tended to give a shit about performing at the wall as opposed to maximising gains through training.
So, training head on, I decided to LEAD as many routes as possible, avoiding toproping as much as possible. Normalising leading, making it the default, certainly helpedmy head, and I was soon knocking on 6a/6a+ after the first session.
I managed to keep this up for a few weeks, until working in Poland and then France meant that I lost the momentum.
On a trip over to Paris however, I did manage to get a short session in at Hottee du Diable again, and made a short vid:
hottee mov uyvy from Rick Ginns on Vimeo.
I also did manage to get on the board a few times, but unfortunately not as much as I wanted.
Outdoor climbing
I've been out a few times over the last couple of months, but at least twice conditions have been appalling. This is a shame as I really want to get more done at Wilton, but it's difficult at this time of year.
The Lancashire Bouldering Guidebook is out shortly, I've already got the pre-order in, and recently the author Robin gave me a tour of Stanworth. On first site, it's very much a typical Lancs grotty quarry. They have their charm though, the quarries, and here, there are around 30 or so problems of a decent range and quality, including possibly the hardest slab in the country, climbed by John Gaskins a while back. Unsurprisingly this is pretty green and doesn't appear to have seen much action recently.
Time was short for me, but I managed to climb a 6b+, Backslash bash, a really nice short problem on the right hand side.
I've taken on the sitter as a bit of a project - the sitter is 7a and easy to train for - it involves a snatchy campus move off a small crimp. I can easily train for this on the fingerboard and woody enough to make the most when I get on it. 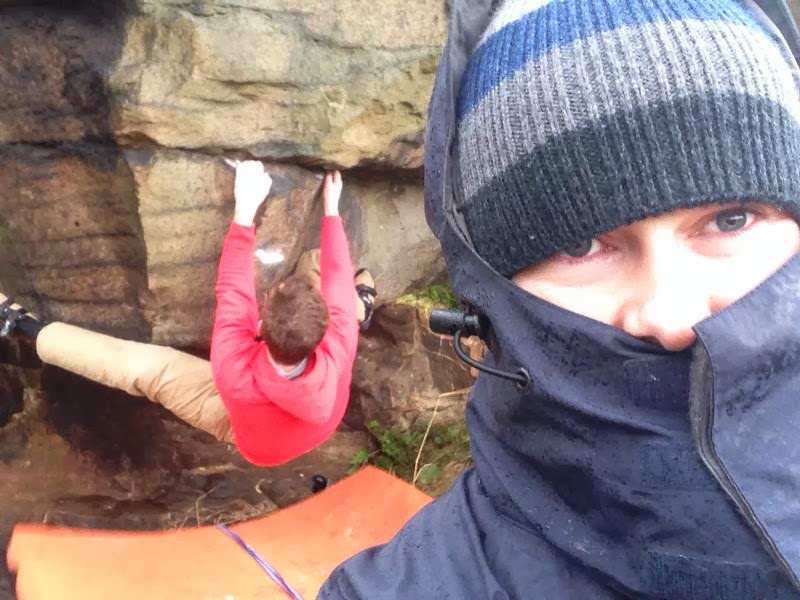