September 28, 2013
I'm quite behind with the blog, but will catch up over the next few days... In Late September me and Dad went up to Kirkby Stephen having walked from St Bees to Kirkby Stephen last year, thus completing half of the Coast to Coast. Last year it took around 5 days to reach Kirkby Stephen, meaning we had 6 days to walk from Kirkby Stephen to Robin Hoods Bay in order to finish in 11 days. We took an early train up, as early as we could, and after a change at Carlisle managed to get to Kirkby Stephen by 10:30am. Then ensued 13 hours of walking... This was to be the longest stretch of the week, over 26 miles and we already had a late start, so it wasn't the best of first days!! The highlight was the pull up to Nine Standards Rigg on Hartley Fell, the boundary between Cumbria and Yorkshire and pretty much the half way point on the route.
We stopped here for some well earned cheese, Brot and dried apricots... 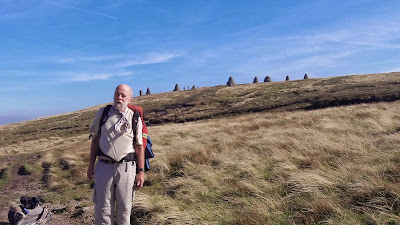 Pops on the way up to Nine Standards Rigg

The descent from Nine Standards Rigg was tricky even after a long dry summer, I daren't think what it would have been like last year, and this slowed us down, especially when I ended up thigh deep in peat. Then after getting mis-routed navigating along a complicated river system, we descended down into Keld. This would have been the best place to stop on this leg, but as there was no accommodation and we weren't set up for camping, we carried on up past the waterfall and up push on to Reeth, a further 11 miles or so. Rather foolishly we lost another half hour going down the wrong path, but eventually found crackpot hall and carried on up the valley before descending to a fantastic mill ruin set in the middle of nowhere. We sat and had a drink for a few minutes before carrying on the other side of the valley.
It should have been straight forward here, but by this time it was getting dark, and we ended up getting quite lost again. After some fervent map reading and compass work, we worked out where we were and with a bit of dead-reckoning, followed a bearing to where we needed to go and eventually found our way back on the path. Before long the path became extremely good and descended very slowly past more ruins and some sort of club hut until after a few miles reaching the road. For the final 3 miles we took to the road, the navigation across country in the dark would have been pretty foolish and extremely difficult to navigate as by this time it was completely dark, without a full moon. The weather, although cloudy by now, had stayed dry all day, and we eventually reached Reeth, getting to the pub (forget the name) by about half past ten.
By this point I was a broken man, having done only a bit (virtually no) training. However we managed to stumble up the hill and get to the youth hostel (Grinton Lodge) by around midnight, enough time to get our heads down for a few hours. I can't recommend Grinton Lodge highly enough, what a fantastic place to stay - we had a room in the tower, which had as an en-suite the biggest bathroom I've had the pleasure to use. 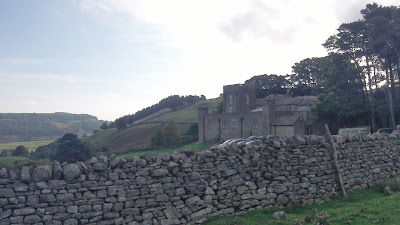 Grinton Lodge the next morning.