September 23, 2013
As I was working away for most of the week I didn't manage to get out anywhere, in spite of working about 30 minutes south of Font. although this was frustrating I know there will be other occasions I can get there.

This weekend saw the very first WiltonFest, a celebration of all things Wilton. This was organised by the BMC and luckily the weather was cracking - well, at least it wasn't raining..  I'd mentioned to R-man  that I'd intending in going and he was too. I was a bit unsure as to how many people would actually make it down, but it seems the Wilton's are really well appreciated, as there were 80 or 90 people down at one point!!

I was pleasantly surprised to see a few boudering mats as well as plenty of old faces: Ousells Tim made it down, keen as mustard to try the line to the right of Cosmic Rockers on the inside of the Prow - a great looking though potentially squeezed in line that both Robin and Tim were trying on a top rope, It'll probably be 7c or harder if it gets done, and it definitely skirts the height between highballing and soloing. Nice. 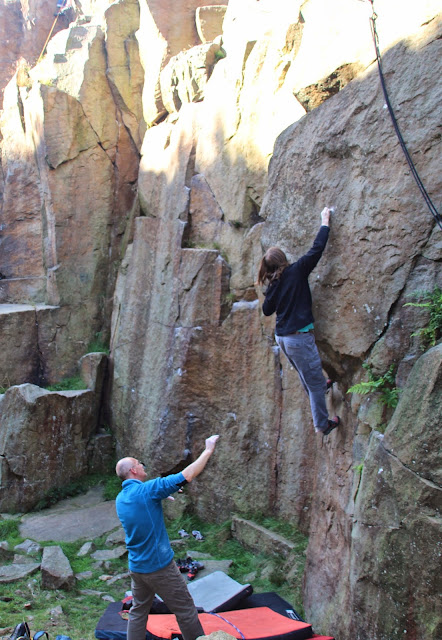 Robin on the project line to the right of Cosmic Rockers. Tim spotting.

After pottering about here I went over to the Woods at the far end of the quarry to look at a couple of lines out of the view of almost a hundred climbers. I climbed an easy boulder problem hereabouts, 'Bean Bag Wet font 5, and had a look at another problem that hasn't been done to the left, which takes a line from a low undercut via a sharp small crimp and a crap left sloper, but this proved pretty stiff, around 6c I reckon, if you avoid the right hand arete feature. There is also a great looking highball arete to the right that hasn't been climbed, to the left of Barbara's man, which itself would be a quality line if the continuation was added. I can't believe these lines seemingly haven't received any attention.
maybe  something to look at if we have a dry Winter.

I met a few of the Bury MOB, who were all pretty friendly, and keen. They've been getting a lot of digging done at Deeply Vale by all accounts and this is now a much more viable option for highballing, as the landing has now been prettty much completely flattened out.

I wandered back over as I could smell the barbecue, met up with robin and stopped for a bit to watch Naomi Buys cruising Parasite E5 6b (although Jordon reckons more like E6). Impressive tradding. 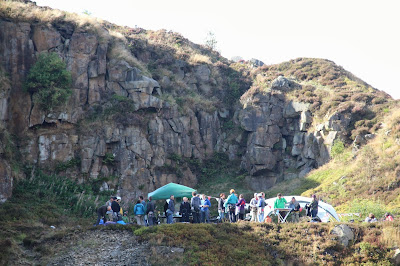 Plenty of people at the first Wilton Fest

There were plenty of people climbing routes that haven't seen ascents for years and it was great to see such psyche for the quarry. 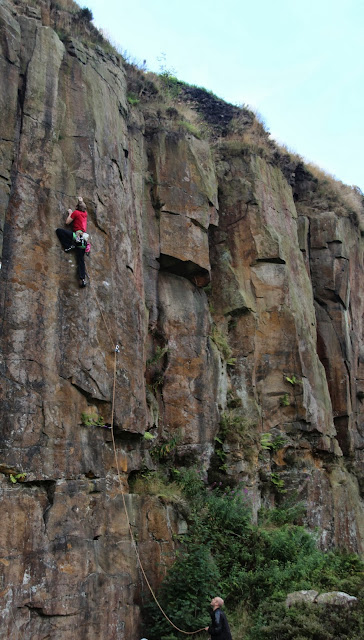 Both Black Mamba and Master Spy saw action as well as Chocolate Girl and the day was topped off by a genuinely impressive ascent of Strawberry Kiss E7 6b by Jordan Buys.