July 10, 2013
I think I'll try to keep this blog a little more up to date than I have been doing, especially as I seem to be getting out a little more than normal. 3 weeks ago our beautiful baby girl arrived, 2 weeks earlier than expected but otherwise healthy, so time looks like it'll be pretty constrained for a while, which gives an extra impetus to get on the board for late night/early morning sessions.

I got out with Taff to Cadshaw small quarry about a week after she was born for a couple of hours. We climbed 7 or 8 problems up to 5c before being out-gunned by midges and after a brief look at Brian Jacques we ran away. Unfortunately a crucial (for me) foothold has been broken on this problem and it now feels a lot harder than it did although I may just need to man up... I may sack it off as something I want to do, but it needs a closer look before I decide I think. It's a proper midge fest up there right now, but the river blocks also need to be looked at as I think there have been developments here too...

The Peregrine is still resident in Wilton 1 which is good. There were rumours of one of them having been shot which turned out to be false, and they should be fledging within days, so that's promising. Peregrine Falcon: A couple of weeks ago I managed to get down to take some photos, most of which were rubbish, with one or two being reasonable. 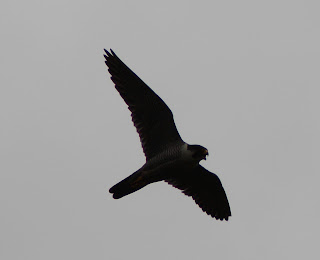 I've been monitoring it relatively frequesntly and it looks like the chicks have been ringed too, so hopefully another successful breeding pair. Unfortunately it's meant steering clear of the right hand end of Wilton, although anything left of the Prow is game, so on that note I went down the other day with girl number 1 and Taffa. Nothing hard was done, but it was nice to be out and there are a surprising number of pretty good boulder problems along Chimney buttress and the outside of the Prow. Although it was warm, it was out of the sun, so not too greasy. Crack 1, Wilton 1: 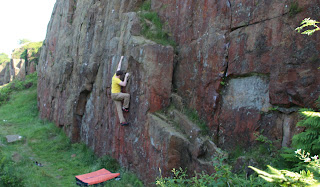 Over the recent good weather I've managed to get out a couple of times before work and bouldered in Wilton 2. There are some great problems here too, but the Wiltons are so often overlooked when it comes to bouldering. At least this means I generally have the place to myself. It's disappointing to see so much land changes have taken place at Wilton 3, the place is unrecognisable from a few months ago with major earth movements everywhere. What used to be a fairly peaceful setting now has a great big shooting shed near the Orange wall and an extended range with huge banking. Also disappointing to see fresh shot marks on the wall. This needs to stop. It's a pretty grim place to climb in nowadays... I'm hoping to get out in the mornings as long as the goood weather keeps up, even if it's only for an hour or so. It's pretty energising before work too.