June 05, 2013
Wow, another few months have gone by without an update. So, what have I been doing I bet all you cool cats are asking? Well, eager not to disappoint my readers reader, here's a rapido summary: At the end of March I had a trip to France, seem to be there quite a bit this year with work, which is not altogether a bad thing.
After various meetings I managed to get free for an afternoon and spent a few hours at a crag called Hottee du Diable which is north east of Paris on the way to Reims, kinda out of the way if you're going straight up to Calais, but well worth the detour if you have the time.
The crag is not far from Coincy which is itself not far from Chateau Thierry. As it was a weekday afternoon there was noone else there apart from a couple of walkers so I had the place to myself along with warm spring weather too.
Don't get me wrong, this is no internationally significant venue, but there are quite a few problems to go at - mostly easy, but there are a handful of problems around the Font 6 to 7 range. Mainly, it's just a great place to visit, not just for the climbing, but for the scenery too. Nice place to be, Just work out where you are, as I got lost and managed to circumnavigate the place twice before finding the car again... More info here On the subject of the FFME the website seems to have massively improved recently, and the crag information is much better than it used to be. Still not on a par with info we have here in the UK, but in terms of crag access information it's a whole lot better.
Here's a little crappy vid shot on the Kodak to give a flavour of what it's like: I did try to add music in PremPro but for some unknown reason it didn't work. No idea why and can't be bothered to work it out: Nothing hard, all sub font 5 if I recall:
hottee from Rick Ginns on Vimeo.
So what else? Well, not really been on the wall much, although I have been clearing and reorganising space to install a hang board, an addition procured from UKB Freecycle.
Cheers AndyD, you're a legend... I've also been to Font at the end of April/beginning of May, again after work. Unfortunately it had been raining the previous day and for some stupid reason I decided to go to Apremont, not exactly the fastest drying location, so after a brief and unsuccessful hour or so I adjourned to the Cul de Chien.
Again, what a great place to simply spend some time... but I did do some climbing here, mainly circuits on blue with a red here and there. I've no media to show, except for a picture of my boots that I took at apremont: 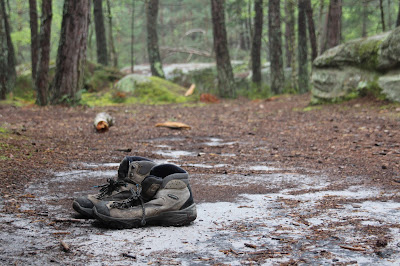 Also, here is someone on the Cul, rather busy as it was only a week or so after Easter... 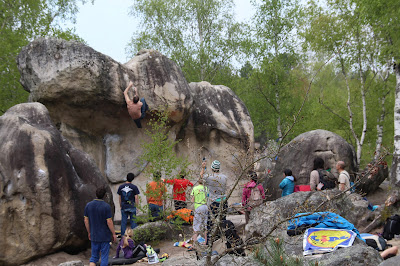 I then had time to head over to Bas Cuvier, and did a few problems of the orange and blue circuits. I think this is one of my favourite Font crags, simply because of the good spread of grades, awesome set up (everything level, walkable and yet boulders not jumbled etc...) and the fact it's basically just nice and friendly.

So, what else apart from that then? Well, I donned a rope in what must be a year to go and do some bumbling at Burbage a couple of weeks ago along with a bit of easy soloing, a thoroughly enjoyable time was had, and it was surprisingly good to be back on the rope again: 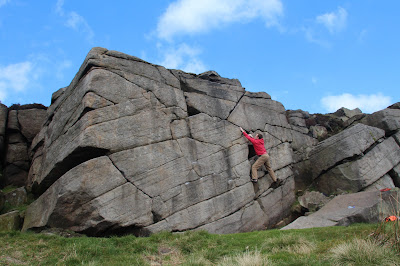 And lastly but not leastly, last night I managed to get to Brownstones on an impromptu visit having had a last minute phone call from the Taff.

I always forget how much I love this place, and I climbed around 20 odd problems, flashed all except Verdigris which felt surprisingly greasy. Also cruised Noddy's crack which is usually an indication of how I'm going. Not too bad it seems: 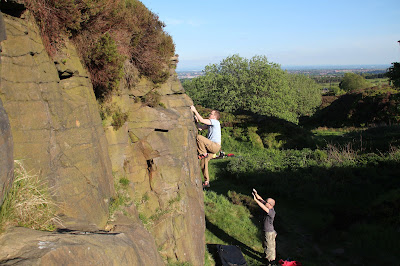