Skip to main content
October 01, 2012
Ok, so it's been some time since I've updated this blog so I thought i'd better put something down.
Work has been manic of late, and having to work away 3 or 4 days out most weeks has meant that I've been unable to get much climbing done at all.
During the brief spells of awful weather however I have been up to the Wiltons, W3 mainly getting some leading in.
I've also been walking a fair bit, and have just come back froma weeks walk with my Dad on the first half of the Coast to Coast. On this first stretch we managed 86 miles from St Bees to Kirkby Stephen in about 4.5 days, four of which were knocking on 20 miles.
The weather was extremely difficult, with almost constant rain for 3 of the days, which even in good waterproofs resulted in very wet clothing at the end of the day. The route was periodically changed due to being unable to cross swollen rivers, and sometimes losing the route, but on the whole we followed the Wainwright book with back up from the 1:25 and got to where we needed to. 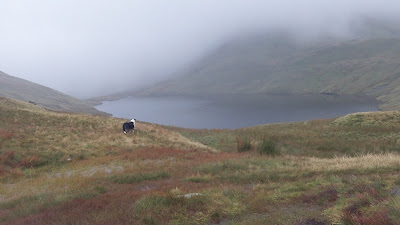 Grizedale Tarn, with the dog that we picked up...

My knees are however now a little buggered, as I didn't manage to get much training in. I seem to have strained the muscle/ligaments you use coming downhill and as a result I'm still hurting 3 days later! 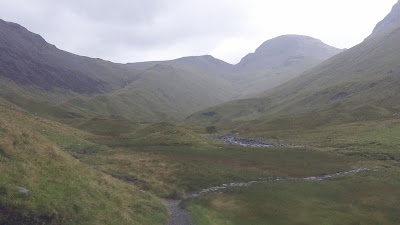 The path to Honister past Great Gable

We plan to finish the walk next year as I couldn't afford all of the holiday required, and the second half should be less mountainous.
The Lakes is a fantastic place to walk an it was tough, but extremely enjoyable. The hostels were on the whole pretty good, most with good drying rooms.

I'll put some more photos up when I have a few moments...