September 28, 2011
Well, I've finally finished the board - I finished it some time ago, but haven't got round to getting a post done. The top board was difficult. I had to mount it on my own , which meant rigging a hoist from the ceiling and man-handling the board so it aligned with the board below.
I cut out the spaces for the rafters to maximise the length of the board and prayed that they fit properly. If they hadn't, I would have been back to square one!
So in the end I managed to get it to fit, although on the far end no matter what I did, the board just wouldn't sit flush with the diagonal beams - so, currently it's sitting just under a cm off the beams.
I used the over-engineering principle and set to screwing as many screws as I possibly could to ensure that it doesn't actually go anywhere, so in spite of this minor fault, the board is now complete.
I took the photo below about 3 weeks ago - since then I've been adding holds as quick as I can carve them, using off-cuts of ply, standard 2x4 and various other timbers that the previous occupants left in the garage to produce a variety of crimps, small jugs, huge jugs and flat holds.
I attached the metolius holds and the other resin holds I bought and now it's looking pretty good.

I've been trying to get on the board a few times a week for an hour or so, but sometimes it's only possible to get 30 or 40 mins in. I need to be careful not to get injured.
I've noticed when I haven't warmed up that my middle fingers ache after a session, but the last few times I've made an effort to warm up properly and this doesn't seem to happen. 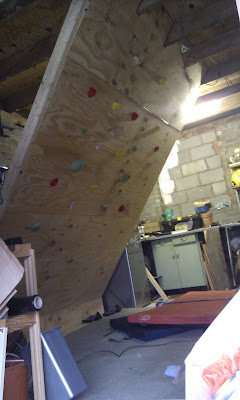