May 30, 2011
Well, it's been some time since I've actually posted on the blog, but a lot has happened at this end. Namely life getting in te bloody way.
I went back to cadshaw a couple of days after the last post and for the one and only time, I manged to latch the crux move from one move in. Really pleased about that - felt easy too. Only thing was I couldn't do it again, and I don't remember what it was exactly I did different.
Ah well.
Apart from that I've been to Rochdale to check out the new bouldering, most of which is good and makes the place a much more appealing place to visit. To my great surprise I managed to crush a 6b+ without much mucking around which given recent climbing volume was very surprising indeed.
I went over to Lower montcliffe too to fail on the Dinosaur 3d problem, although it was very sweaty at the time.... this problem still aludes me.

On the life front, I've been mostly still sorting boxes out from the house move, but also I've redecorated the second bedroom too which has taken some considerable time, removing the hideous "watercolour green" woodchip and replacing it with less hideous magnolia and striped non-woodchip wallpaper.
I've also been trying to clear space in the garage to make way for the soon to be crush-board. So far, I've calculated that I should have just over 11.5 feet of actual climbing at an angle of 36 degrees which I'm happy with. Here's a photo of the space, if you grab the nearest microscope you may be able to see the faint diagonal string I put up to get an idea of the space.
It should be over ten feet wide which is plenty to figure out circular endurance laps. I was going to make the angle less steep, but as I don't intend on changing it or having to adjust it I don't see the point. The pic doesn't really do the size justice as it is fairly big really, it's taken from in the corner 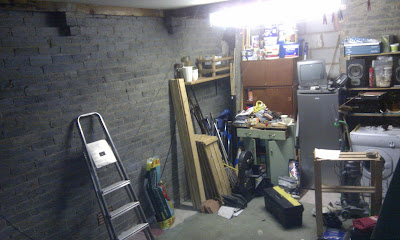 Apart from the housey stuff, I've also been to Germany working for 9 days, and then to Paris so when I have been at home, climbing has had to take a back seat really.
Hopefully that will change...
We'll see.