March 21, 2011
Cracking weather on saturday necessitated a climbing session, and so I headed to the north east up to Yorkshire.
It's so easy to become pissed off with day to day drudgery, but it struck me over the weekend how lucky I am to be living in such a great area for climbing. Yorkshire gritstone only an hour away, Cumbrian limestone about the same, the Peak district not much further, and the glorious gritstone quarries on the doorstep.
Where I grew up in Northamptonshire there are barely hills, let alone crags, and most of the quarries are gravel pits, or otherwise filled with water.
When the house finally goes through and we're up in Egerton, the quarries become a realistic summer morning prospect, if I have the motivation. Although if Hank is prepared to do laps on Moss wall at 7.30am in the summer then I really should at least try to get my arse in gear.
Last week the club had a talk by the man Fawcett. Or maybe I should say the Legend Fawcett.
I was struck by his modesty, but the slides and stories speak for themselves. This man really was motivated to get out there and comes across as a genuinely nice guy. He presented a copy of his book to the John Roberts Library, and as custodian of the library we had a photo taken. Another valuable addition to the 700 odd books already in the collection (I really need to think about buying some more shelves!) 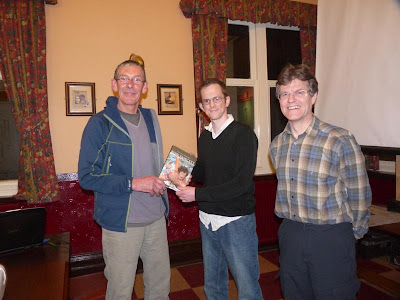 Big Ron presenting his autobiography to the Lancs Caving and Climbing Club (Ron, me and El Chairman)

Anyway, back to reality. I went over to Widdop on Saturday. Partly because I had a couple of problems I wanted to get done, and partly because the brother in law wanted to go somewhere and hadn't climbed for over a year. We got started on the pickpocket block, on the easy side and to get him going I pointed him up a few of the easier slabby problems
With those under his belt we moved over to near the four square block and the V1 problem with the dyno in the middle of the wall. A really satisfying hold once you get it, which eventually he did.
Then I had a go at Splashdown, and hit the slopey hold first go, but failed to latch it. This is another problem that it seems you have to time right to have success. For some reason I just couldn't get hold of it.
NExt, we moved over to Grumpy old men, a diminuitive problem of about 4 moves, but frustrating as hell. I was however pleased to latch and hold the right arete after only a few tries, a move which I had considerable trouble with last year.
But at only 6b ish, I really do seem to be stagnating, or worse, going backwards...!
I think what with not getting out very much recently and having my eye off the ball and on child duties, I really am under performing. Coupled with an end of winter lull, it doesn't make for a crush filled blog, so if you're reading this, I convey my apologies.

Having said all that, it's always good to have a plan, and this year is full of plans. Once we're set up somewhere new, Project Board can begin, and I can get some structure back to my climbing. He with a plan is the man who can...