September 28, 2010
Last night I went over to have a look at a project I've been eyeing up in an attempt to guage whether it's worth giving it any serious thought.
I didn't get there until nearly 6 as I left work late, and it was quite humid, being about 16 degrees. As it's relatively closed in the rock was predictably fairly greasy.
I'd come completely unprepared, having forgotton my brushes and bouldering shoes. Instead I had my old trad shoes and a chalk bag with no chalk in it. Things didn't start well.
ah bugger it.
I'd been feeling progressively more and more rough as the day wore on, so I wasn't hopeful of getting much done.
The problem goes from a low sidepull jug to a slopey 3 finger hold, then there's a hard off balance move to back hand a crimp which should allow you to get high feet and reach to the break.
As I did the first move the sidepull exploded in my left hand, spraining my wrist and sending me sprawling on the mat.
Sounds dramatic eh? Well, maybe it wasn't quite an explosion, but it did send me on my arse. It's that sort off crappy lancs crumbly dusty sub-rock and makes me think the whole low flakey jug is suspect...hmmm
I decided to go. I was already feeling cack, and really didn't want to continue to be midged either.
I think it's worth spending time on, although it could do with a cleaning and an extra mat.
So I trudged home, feeling sorry for myself. Since then, I've been in bed, going to work just wasn't an option this morning. I think it's a case of serious man-flu, but hopefully It'll be 2 days instead of 2 weeks...
Here's the hold I ripped from the wall. It's about the size of a fist. raah! 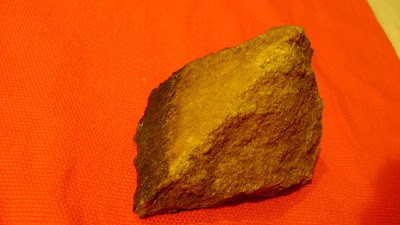