July 23, 2010
Well, this running lark seems to be getting its claws in. I am starting to recover a bit quicker than I could before and although it's only been 3 weeks, I can already see my times improving and feel fitter as well.
I suppose if there's any silver lining to be gained from fucking my hand up, it's that I would never have started running if it weren't for having an enforced period away from climbing. Speaking of which, it's healing nicely. 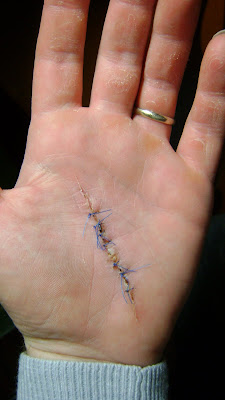 I've now got the wound uncovered and it's fairly ok, except when I knock it. Wednesday saw my doubled over in pain though after trying to open a car air freshener. It sprang back into my hand.
Anyway as long as I don't knock it, it's fine.
Sooo, tonight I arranged to meet up with the G-star for a run. Cadshaw was the choice of the day. I got there at about half 5 and G got there a bit after. we set out after a few minutes.
The last couple of times I've been out I've managed to give myself a stitch, which on the Winter Hill run was pretty crippling. Starting off slowly apparantly helps prevent this, as it's the jolting of internal ligaments that causes it.
In spite of knowing this I still started out at a fast pace, and lo and behold started to develop a stitch... GCW kept to a steady pace. Sensible man.
After a mild castigation from G, the pace steadied up.
We went his way round this time, actually a good route because it meant we were out of the sun on the return.
I rushed my pace on the hill on the way back, then was flagging on the incline. Mistake. GCW overtook me and powered home to beat me by about 30 seconds.
I was aiming to take a minute off my previous best of 44 minutes, but the actual time was under 41 mins.
Really pleased, and quite surprised I could take so much time off as I didn't think it'd be so easy. I reckon a sub 40 time isn't out of the question.
I found it good to run with someone else, it seemed to help the pace too.
I might head out for a Jumbles circuit tomorrow, otherwise it's Monday or Tuesday.
Bonza.