The rain seemed to be from low lying clouds and was that sort of drizzly stuff that doesn't seem to clear quickly. Bugger. This did however seem to be shifting after a couple of hours and the day seemed to be clearing up nicely.
Andy and Rach had decided to head into Font itself to check out the local attractions whilst we decided to kick around the gite to wait for the weather to do something or other.
The clouds started to clear about lunchtime so we agreed to meet Andy and Rach at Apremont as it's supposed to be a quick drying venue. Info from GCW was that it was covered and might not be as good as Sabots which was where they were headed but as we were meeting people there already I decided to head over with a view to moving if it was rubbish. It was actually pretty good. We decided to head over to the Bizons area for no other reason than it was fairly close and there were amenable climbs for everyone. We started on the orange circuit, particularly on La Pulpe et les Pépins 4+ which I did second go and the whole circuit was good, if a little less travelled than other venues in the forest. 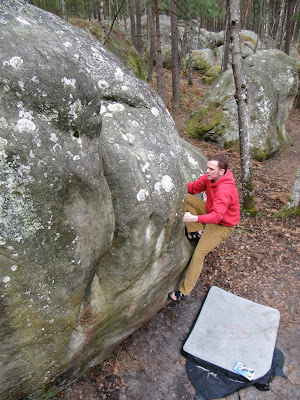 On the red circuit We continued round the circuit until we got to red 11 5+ which was a really frustrating dynamic jump to a small crimp. It seemed all about timing but none of us managed to do it in spite of the fun we had trying. 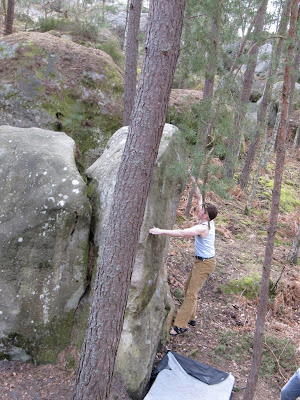 The best route of the day for me was red 25 - although it was only 4+ the moves were great and it was fairly spicey as it felt high. The others didn't fancy it and by this time it was approaching half seven so we decided to head back. 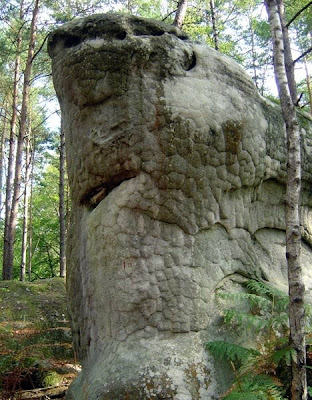