April 10, 2010
The day started off by taking the car to the garage. In typical gallic style, the garagiste took a look at me and assumed I wouldn't be able to communicate. he seemed happy when I could and I played on the fact that the owner of the gite had recommended his garage in a preventative attempt not to get screwed.
He took the car for a spin and came back saying he didn't think there was anything wrong with it. I explained that the sound was intermittent and he said he'd take a look at it and let me know later in the day if he found anything dangerous.
After heading back to the gite to pick up the girls we decided to head off to l'elephant having to shuttle run twice. Following a brief look at the black ciruit problems 1 and 2 I realised I needed to warm up. After several orange and blue problems I decided to have a look at La Traversée des Fissures Vertes (6a) which seemed to suit me more. After looking at the first few moves it seemed to be going well but for some reason I couldn't hold the high left hand sloper - the start seemed ok but I couldn't top it out. This was really frustrating but I felt like I was making good progress and the shoulder was feeling strong again, albeit a little achey afterwards. 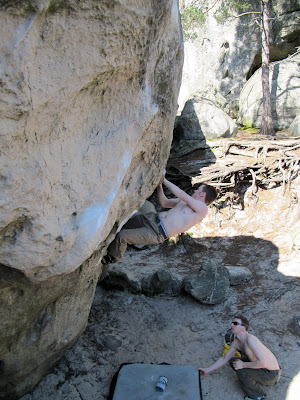 Me on Fissures Vertes

Taff and the others were having fun on the blue circuit and topped out the elephant itself which they all enjoyed. They seemed to be getting used to the Font climbing style and also the highball nature of the elephant. Chris went off for a walk with his binoculars to see if he could spot some of the local wildlife and we all continued on with the blue problems until we got to a cool little overhang at about 5+ -Le Surplomb au Gratton on the black circuit, the hardest thing about this was actually topping out - again. Andy was also looking strong on this, but neither of us got it nailed even though we'd pretty much done the problem. 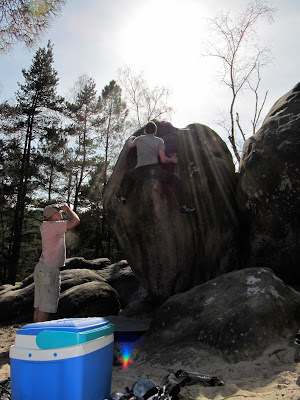 I personally was quite tired which is my excuse, but anyhow it was fun. Whilst Andy did the shuttle run me and Chris carried on doing a few more of the blue problems most of which I can't remember, but most of which were good!

In the afternoon the garage rang to say the car had a major problem with the brakes which necessitated a complete replacement. This was likely to be pricey, but would have needed doing sooner or later. I told him to go ahead with it, without having much choice really and agreed to pick the car up on the following afternoon.