March 15, 2010
After a couple of non eventful post-work Brownstones trips last week I managed to also get over to Broughton on Thursday afternoon with Ste. The more I go to this wall, the more I like it. There are just so many problems to go at, and although a lot of them do cross over each other, I reckon this is one of the best walls in the country.

The Taffman hasn’t been out in ages, so on Sunday, an easy doors trip out was the order of the day, and it looked like the rain wouldn’t make an appearance.
Taff came round at about 10 and after tea we headed over to Brownstones. The conditions were excellent, about as good as they get, it wasn’t too cold to make climbing unpleasant, but there was still good friction for most of the time.
The lack of rain recently has meant that seepage is virtually zero, even the Ash Pit walls aren’t wet like they usually are! We didn’t some across any damp holds the entire time we were there.
As well as messing around on other things, I ticked the following: Pocket hole wall, Magic circle, Obscenity, Bunnies dilemma, Slab direct, Blurt, Halt, The prow, Fineline, Diane, Little man, Crooked crack, Way down, Noddys wall, Groovy.
I seem to be going alright at the moment, as obscenity felt easy, even the highball-ness didn’t faze me at all, which was pleasant. The moves felt brilliant.

Tom came down after a bit, and seems to be climbing well. He was keen for a visit to Lower Montcliffe but I managed to persuade him to Brownstones. Nevertheless I filled him in on the LM bouldering beta, which reminds me, Indian Face could be a good local hit to go for this year.

I even managed to tick a few problems I’ve not previously climbed before at Brownstones to the right of Hanks wall. Nothing hard, but enjoyable problems nonetheless. There was one alarming thing though, the block at the top of Way Down is coming loose – this is a huge block, it must weigh half a tonne so if it does come down with anyone nearby there could be trouble… when topping out onto the block it distinctly rocked. It will take some time, and there is still plenty of earth around it, but as this is eroded (it's pretty loose earth) it will become looser.
Aside from pulling it down there’s not much that can be done unfortunately.

After a pint in the Bob Smithy it was time to head back. It was an enjoyable day that reminded me of why I started climbing in the first place. Great stuff. 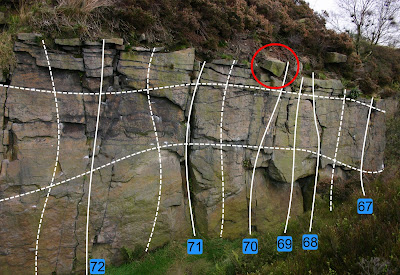 (props to the lanky one, gcw for the high res photo, cheers dude!)