February 01, 2010
Reading GCW’s latest post on climbing motivation has got me thinking (not necessarily a good thing, but anyhow): I have a tendency at this time of year to lose sight of my climbing goals, at least temporarily. 2009 saw about 6 weeks off climbing at the front end of the year, in 2008 it was about 3 months...
It seems too easy to blame it on the short days or the weather because winter is not exactly a secret. We expect it every year, know it’s coming and so logically, should be able to form some sort of strategising to get through it.
Invariably however, I get lardy over Christmas, enjoy a brief, New Years enthusiasm, and then usually around mid-January settle into a de-motivated state in which few gains seem to be made which makes it twice as hard to go climbing. In the normal scheme of things, this then turns back into enthusiasm when the nights start to get lighter around March. The problem is, my preceding inactivity has usually led to inhibited crushing skills (negative cycle continues…).
Trying to juggle a 9 to 5 job (which precludes daylight climbing on weekdays in the winter anyway) as well as domestic duties and climbing can be difficult at this time of the year but is it that more difficult than any other time of the year or do we always think ‘it’ll be better when it’s lighter / warmer / colder /etc…’
As people we always tend to compare ourselves and our situation to other peoples – this includes of course, our climbing ability, and when you see other people crushing left, right and centre, how can you maintain the momentum to keep training? Is this a real representation or just a perceived view of things?
What you don’t see, of course, is all of the work that goes behind their crushing, I mean hardly anyone can pull it out of the bag and crush at their hardest without, usually, considerable work being done beforehand.

I’ve come to the conclusion it’s all about two things, for me at least: attitude and expectations.
During the spring when I can get outside most week day evenings, even if only for an hour or so, I feel like I’m making progress, as I’m climbing on rock most days, I’ve been outside, usually warmed up on some classics (an enjoyment in itself), flog myself on some problem I want to climb and arrive home with tired fingers. The feeling of making progress is higher, probably because I like it more than climbing indoors, (cue repetitive move after repetitive move…).
In the winter, when I can get climbing (usually indoors), maybe twice a week if lucky, sessions tend to end in disappointment at not being able to climb this grade, or that angle or just feeling crap or stressed after work. These negative feelings quite naturally add to the lack of motivation and then inactivity.
So this year, I am determined to make it different to previous years.
Sometimes I’m going to be rubbish and fail at everything at the wall. This is inevitable. But if activity stops altogether then I definitely will fail on spring/summer projects. If I keep at it, the gains will come eventually. I have come to the opinion that the most important thing is to keep focus on the bigger picture.
If I expect to be able to climb the hardest I’ve ever climbed every time I go, I’ll soon be disappointed…expect less, focus better. 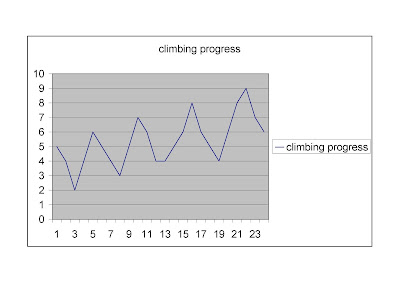 Recent activity
well, if you’ve read this far, I’m impressed!
recently I’ve been to Rochdale a couple of times, can normally get up the blues, then get spanked on the pinks – need to try them a little earlier in the session I think.
Also I’ve managed a trip to Broughton during which I flashed a 5c which I was pretty pleased at as they’re nails there…and a couple of trips to Preston, one bouldering and one roping session which was enjoyable bearing in mind it’s been about 6 months since I last put on a harness. I surprised myself by getting up a 6b without too much effort.
I’ve also been putting in the CV work, over the last 2 weeks swimming 235 lengths, and upping the abs work (700 sit ups) to try and improve core strength.
Need to open hand more at Broughton and start the hanging sessions…