October 30, 2009
Rather a mixed bag this week, I’ve been on the road for the last four days, but still managed to bunk off a bit early to go climbing. Firstly on Monday I was over Burnley way, so once I’d finished work I snatched an hour or so at Widdop. Unfortunately the whole place was sodden, and humid. I guess because it’s quite high up. The clouds were rolling in…
The weather forecast proved to be predictably wrong, as it had spoken of dry warm weather.. ah well, I guess it’s the first of the autumn trip disappointments.
Still, I decided not to waste the visit and take a look at all of the other bouldering I haven’t previously had a look at. I started over at the left of mystery buttress at a couple of good but hard lines on the vaguely overhanging reddish wall, which all look a bit hard to me.
Then I worked right, following the problems in the Rockfax guide. Although a lot of the problems are in my range, the landings are often not ideal. Eventually I got to the Resevoir Dogs buttress – the chipped route up the centre of the wall looks awesome if a bit bold (artificial route?).
Anyway, I made my way down the slope to the other lake boulders and one of the boulder problems also looks good, I might have to add it to the list – can’t remember the name I’ll have to look it up, but it involved a sitstart on a curious slopey gulley, then slap up to a lip, heel hook the starting hold and mantle it out – try and guess what it is!! Well, it looked good to me.
I Finally got to the pocket wall. This really should go next time I head down, as it doesn’t look that hard… I just need to try it fresh I think. I headed back.
Wednesday I was working over in north Derbs and was finished by about 4. This left me with only an hour before sundown and no idea of what was in the area so I decided to get a hotel up in Sheffield and give the Works a go, as I’ve never been there before. I really was pleasantly surprised, all the problems are in circuits and they’re all font graded as well. The walls are varied with a good mix of slabs, overhangs and freehanging supersteep structures. I think if I lived in Sheffield this would be my wall of choice. If I was super critical, it was very busy although this is to be expected at this time of the year, and no one seemed to be brushing the holds which meant having to brush them each time. Anyways, I did mostly brown or black circuit problems up to about 6b and felt like I’d had a really good burn. Broughton is calling again…
Yesterday I managed to call into Burbage South as I happened to be passing through (as you do) and got a few of the easy V1/2 problems done, but to be honest I was a bit knackered from Wednesday.
All in all a fairly good week. On a slightly separate note, I received a copy of the ’86 Lancs area guide, which is one of the guides missing from my collection – this means that I am only missing 3 of the guides of the area – one of the ‘80s updates, the Alpine Sports Wilton guide and the original 1947 Eric Parr Brownstones guide. Having said this, I have a scanned copy of this last one from a chap with the original – too bad he won’t sell it… although I certainly wouldn’t if I had one. I wonder how many still exist! 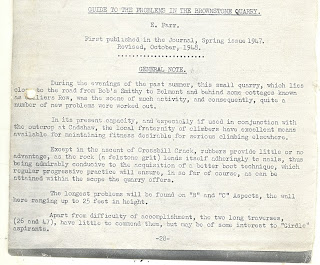