September 01, 2009
Ok, so I’ve not posted on here for what seems like an aeon. This is for several reasons. Primarily I seem to have lost the love recently, which mirrors the front end of the year in which I barely climbed for 3 months. secondly, I’ve been out of action for the last 6 or so weekends due to various stag do’s and weddings (including a memorable 3 days of guns, strippers, white water and zlotys in Poland) the result of which means I’m not only fat from too much booze (as the wii fit kindly pointed out), but I’m also weak as a weak thing.

Anyway, in a bid to sort this out I had a free day on Saturday so decided to head up to Denham to get some problems I’ve had my eye on recently. Got the car loaded up, mat, chalk, tape, camera etc and set off on the road. At junction 6, it started raining, and as has been a feature of this summer it only got heavier. I thought I might be ok, as it didn’t seem too heavy, but on closer inspection the rock was sodden and the rain seemed to only be getting worse, so I cut my losses and bailed. Interestingly there were people climbing there although they were abseiling to retrieve gear from the shelf at 4m. seemed a bit bizarre to me to be abbing that far for gear that could be reached from the shelf, but hey-ho.

Sadly, some thoughtless cretin had been fly-tipping - duly reported to Chorley Council. It’s a shame that people show such disregard for our environment. 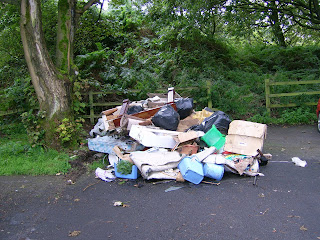 Anyhow, on leaving Denham I went straight over to Brownstones on the off chance that it had missed the rain and was dry. I’ve umpteen projects there to get finished, but alas, it wasn’t to be – the whole place was soaking. Looks like it’ll take some time to dry out too. None of this was doing any help to my psyche… plan C was to head indoors, even though I would rather have done anything else, so I hot-footed it over to Rochdale as Broughton was shutting at 3. I had a good session, starting off by traversing for about 20 minutes solid, trying to increase the pump gradually, then resting and shaking out, then building up the pump again by traversing, then bringing it down again etc. Not sure whether it’s doing me any good, then tried a series of the up problems, many of which felt remarkably easy – looks like this is the start of the indoor season, especially given the cyclonic forecast this week…